by rsilk
Got a few of the inserts mounted, the side rails screwed in, and one of the pop bumpers mounted tonight: 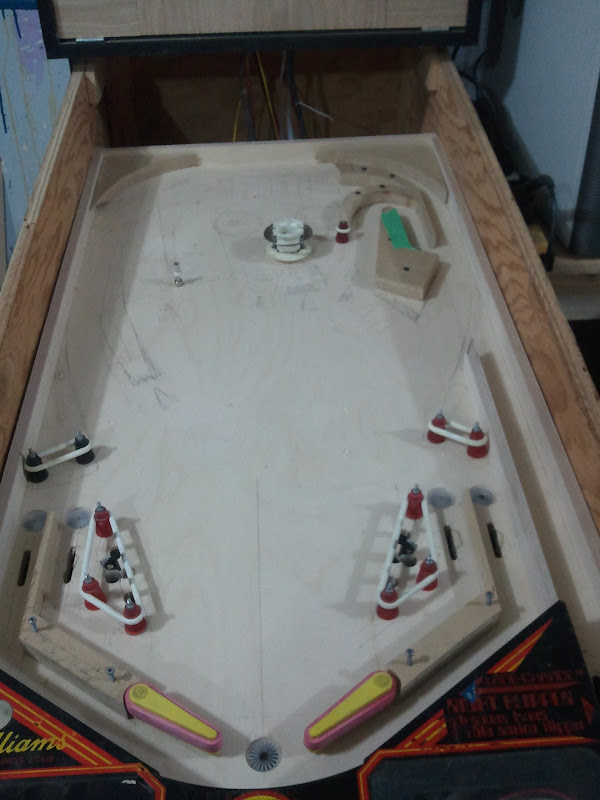 Oh, and I milled some more inserts too. Took a short video this time:
http://youtu.be/ZoExxC7wPfU

by rsilk
Been a while since the last update. Lots done since then!

* Pop bumpers mounted and working
* Eject scoop installed
* Wire tracks built, one of them installed
* Rollovers installed, with switches and light inserts
* Started working on some of the ball paths in and out of the bumpers

Still to do:
* Install the other wire track
* Build the ramps up to both tracks
* Install the stand-up switches
* Start replacing some of the temporary MDF parts with their final versions
* Finalize theme so I can start making and installing the rest of the lamp inserts
* Install and wire up the entire lamp matrix, and all the GI lighting.
* Put bleeder resistor on the power rail for the solenoids so I stop blowing pins on my arduino while I'm soldering. I think I've cooked 3 or 4 now. 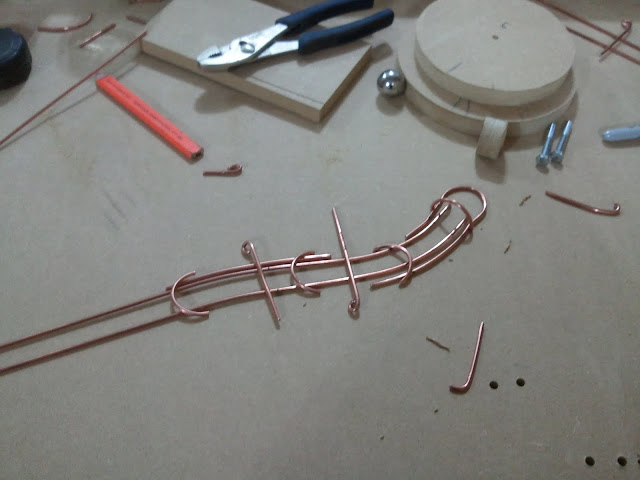 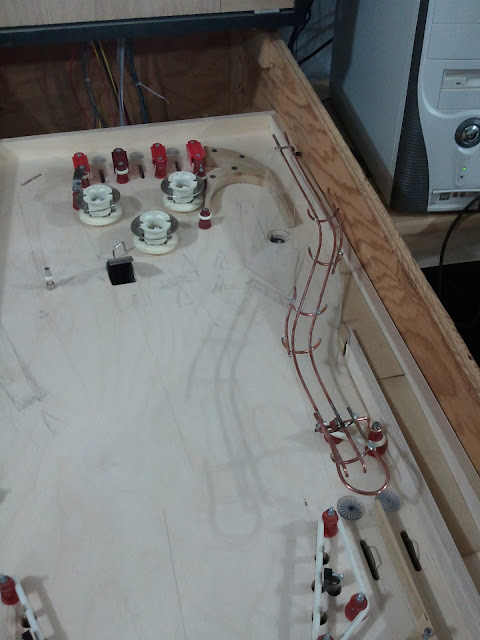 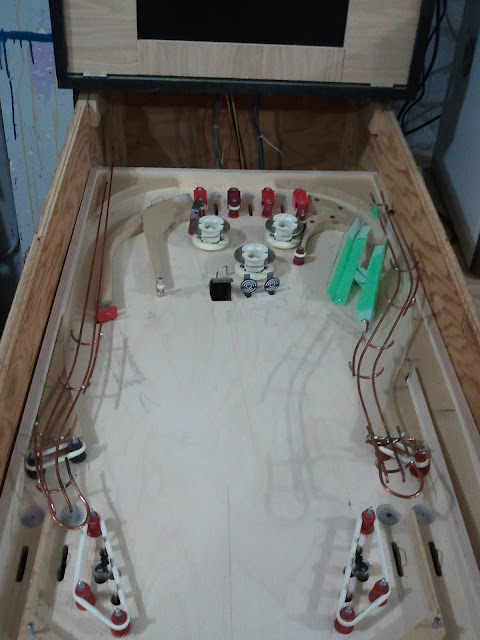 by rsilk
Got the left ramp built this weekend.

Cut out the parts with the CNC (woo CNC!): 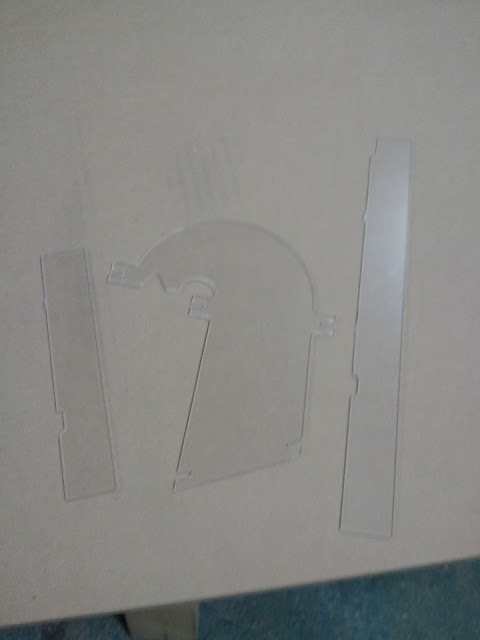 Then shaped the walls by softening the acrylic with a torch and bending. 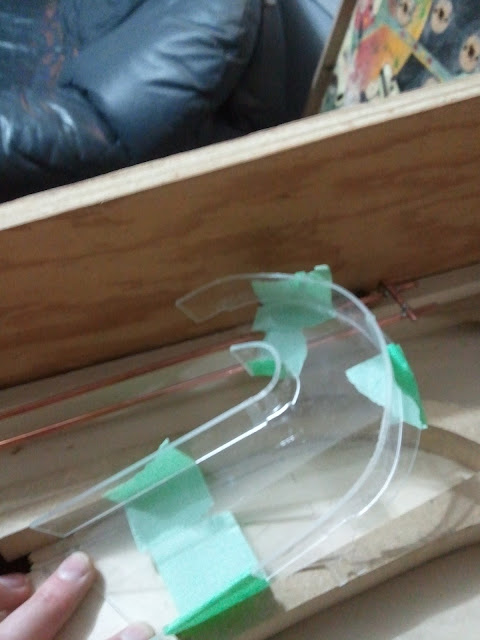 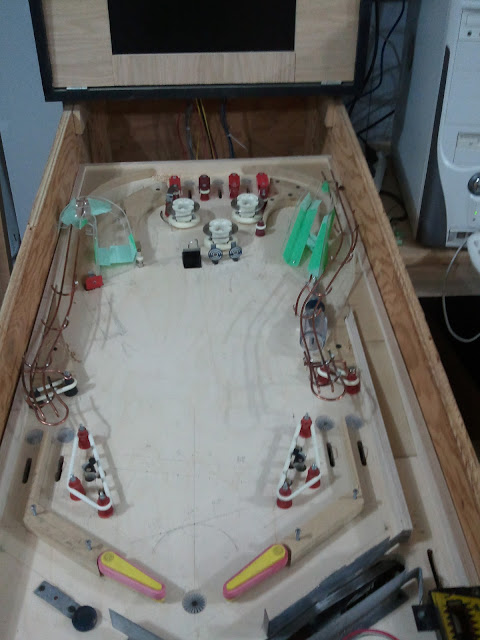 by rsilk
Long time since the last update. I blew up the arduino when I shorted coil power into the switch matrix while soldering something under the playfield (d'oh!), and I haven't gotten much done construction-wise since then. Instead, I've decided to go back to the drawing board a little bit and build a more robust boardset using something newer than system11 tech. The new system is going to be I2C based, using a Raspberry Pi microcomputer as the controller. All illumination will be done with tri-color LEDs, and I'm scrapping the switch and lamp matrices. I'll just build a bunch of I/O cards and mount them below the playfield.

The first board I've been working on is the LED driver. It's based around a pair PCA9634 8-channel driver chip, and gives me independent control of 16 LEDs. by JamesCooper
Are the red and green your top and bottom layers? It looks like you might be missing a couple of vias; there are green traces that end over red ones with no via or through-hole. Look near D1, C1, C2, ... looks like there are several.

by rsilk
Some of them show up quite faint, for some reason. Those are vias I had to place manually, probably the snap grid kept them from being "actually" connected, but it should (hopefully) be fine when manufactured. All the copper is in the right place.

In related news, a 16x GPIO board! by JamesCooper
Oh, sure enough, I can see those vias on a different screen; they were just too dark on my desktop monitor.

Looking good silk, keep it up! Doesn't look like much has changed, but I've now got full lamp, coil and switch emulation, a graphics framework, and more.
All times are UTC-06:00
Page 4 of 5