Some of our members have been hard at work building combat robots for the upcoming Kilobots XXXI which will take place at the Saskatoon Comic & Entertainment Expo on September 19th and 20th, 2015.

Rachel is rebuilding a bot formerly known as Roadrunner: 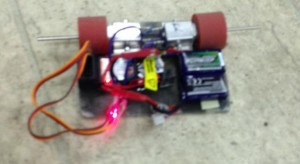 “it’s running and it is calibrated now to weld the body and put it on almost done so excited!”

Al has done some upgrades to the drive system of Kitty Shark.  He might have overdone it:

Jeremy has done a very nice job on Psychomauler.  He has used the CNC router, the CNC mill, and the laser cutter during the design and build of this one: 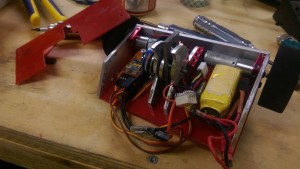 “Psychomauler mostly put together. Had to give up on the carbon fibre after  the CNC screwed up and cut it the wrong size (missed steps, or something like that), so garolite will have to do. I should still be OK for weight,  I’m at about 350g currently and just need to add my titanium wedge.”