A few years ago I built a “Terrorist Bomb” for RLBC to use as a paintball game. It was simple. It was hacked together out of a variety of parts I had lying around. It was also a huge hit.

After that, we started talking about a grander scheme. The next game would consist of three bases with buttons and lights. Initially it was traffic lights, but it eventually became the light pole we ended up using. The biggest problem with this sort of “capture the flag” type game is having referees to keep score. If we could use technology to keep score, it frees up the refs so they can focus on fair gameplay. I had been using XBee devices in my “day job,” so decided they would work great for communication between the bases and the command centre.

The system I ended up building consists of a Parallax Propeller based circuit board in a Seahorse case with an SLA battery for power. The light pole uses LED strips intended for ground effect lighting and the buttons are standard arcade machine buttons. Communications are provided by XBee S3B-DM modules, which are probably way overkill for the application, but I decided to start at the top rather than have to work my way up until I found what worked. The base station communications is provided by a stock Digi XBee development board connected to the computer by a USB cable.

After the initial software developer fell through, I took it upon myself to write the command centre software as well. (I don’t claim to be a software guy — especially GUI applications.) The software monitors the bases throughout the timed game and counts up the score for each team while the base is held by them. It will also remotely reset the base states when starting a new game, and puts all the bases into “win mode” at the end of a game. (They slow blink the winning team colour and no longer respond to button presses until the next game is started.)

The software was written in Free Pascal using the Lazarus IDE. Lazarus is a cross platform development environment and the plan, initially, was to install the software on an older Macintosh laptop. Sadly, I couldn’t get the serial communications library working on the Mac, so I ended up installing the software on an old Windows XP laptop.

July 4th was the first full day of camp for the 2016 season, and a perfect day to try out the new game. 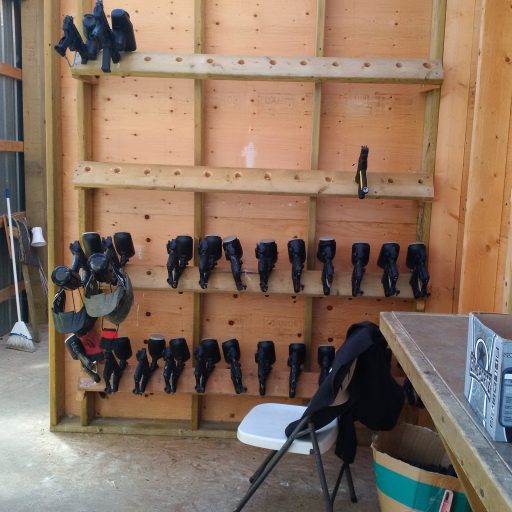 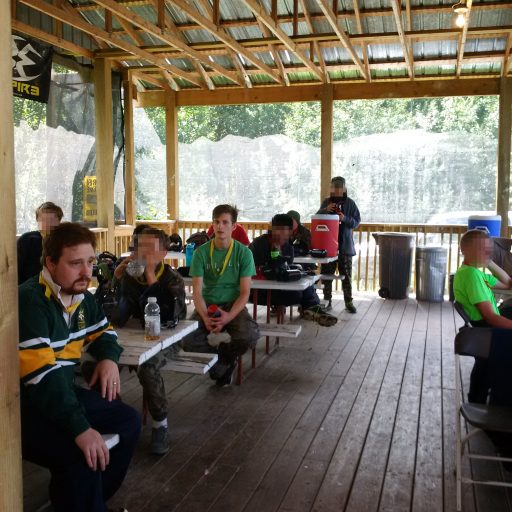 We installed the base stations at locations around the paintball range and set up the command centre in the safe area building. I was a little worried about the fact we had a metal wall between one of the bases and the command centre, but communications was not a problem.

I watched the first couple of games from inside the safe zone. One of the staff provided the players with game progress updates over the PA system. Finally, on the third game, I decided to venture out and watch the action first hand. Sadly, after one picture, my phone announced to me that my memory card was full… and I didn’t feel in a particularly safe situation to go through my pictures and delete old ones. So this is the only photo I got while paintballs were whizzing around me. Yes the ref is protecting his junk. He was caught in the crossfire between a couple players. Yes, he did get hit.

It seems like the game was a huge hit. Many of the campers thanked me for building it, and a few also put two and two together and asked, excitedly, if I was also the guy who built the “Terrorist Bomb.” Yes. Yes, I am. (But in polite company I refer to it as the “Game Timer.”)