At CNC Ground School you will learn the theory required to generate GCODE files appropriate for Goliath. (Our CNC Router)  You will learn about feeds and speeds and how to use the VCarvePro software available to our members. This class is a prerequisite for on-machine training. There is no charge for this class.

This 6 hour workshop will introduce you to the many forms of input and output on an Arduino compatible microcontroller. You will learn:

The price for the workshop includes an Arduino compatible UNO, breadboard, wires, and a variety of devices to demonstrate and experiment with different styles of Input and Output.

Build your own Electronic Die.  Learn to solder and to load firmware onto an ATTiny85 microcontroller.  (No programming required, but it is reprogrammable if you so desire.) $60

Learn to make soap at Saskatoon Techworks. ALL required materials will be supplied for this workshop, and you will go home with uncured soap that can be cut into about nine generous-sized bars of Hand-Crafted Natural Soap. $60

This five hour workshop (two Thursday evenings) will take the participant with no experience with electronics and will teach the basics of voltage, current, and resistance.  You will learn to build basic circuits and will calculate and take measurements on those circuits to confirm your calculations. $60

Learn to make soap at Saskatoon Techworks. ALL required materials will be supplied for this workshop, and you will go home with uncured soap that can be cut into about nine generous-sized bars of Hand-Crafted Natural Soap. $60

Do you enjoy making things? Do you ever wish you had the room or cash to buy expensive tools? Do you wish you had more friends who shared your passion for making cool things? Check out Saskatoon TechWorks, Saskatoon’s premier maker community.

Our doors will be open to the public on June 8th, 2019, 10am-5pm. Members will be available to show you our shop and answer your questions.

Saskatoon TechWorks is now the proud licensee of VCarve Pro Makerspace Edition.  What does this mean to you?  As a TechWorks member, you can download the trial version of VCarve Pro and enter our Makerspace ID. (Ask us for it.)  After entering our Makerspace ID, you can prepare your CNC job.  That version will not save your toolpaths but you can do everything else to get your files ready for the CNC router.  Save your project and bring your .crv file to the space, load it up in our “Master” copy, export the gcode, and you’re ready to make your masterpiece on our CNC router!

(Note: Our license says that the toolpath files are only for use on the CNC equipment at our space.  I’m not sure how they or we would enforce that, but you should know that that is the rules.)

Have you checked out the TechWorks Store recently?  Everything is back in stock and we have added a dozen new items recently.

The new space is really coming together.  The drywall and vinyl door are up in the dirty room.

As of September 1, 2016, we will be located at 412 44th St E., just North of Circle Drive and East of Faithful Ave. Our new location will be over twice as large, including a much larger shop area and dedicated office space available for members to rent. We will remember our old location at 509A Gray Ave. fondly, but with every end comes a new beginning, and we are excited for the opportunities this presents to our members and to the community.

We need your help!

END_OF_DOCUMENT_TOKEN_TO_BE_REPLACED

Come out and have some fun.

So, years ago my daughter used an old briefcase of mine to keep some of her stuff in.  Today she asked me if I remembered the combination… yeah, right. 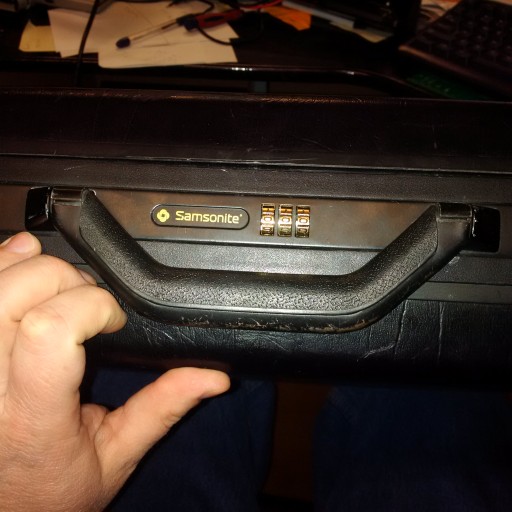 So, I tried all sorts of bits of old phone numbers, but no joy.

But… apparently, there is a visual difference in the gap beside the wheel when you’re on the correct number.  So: 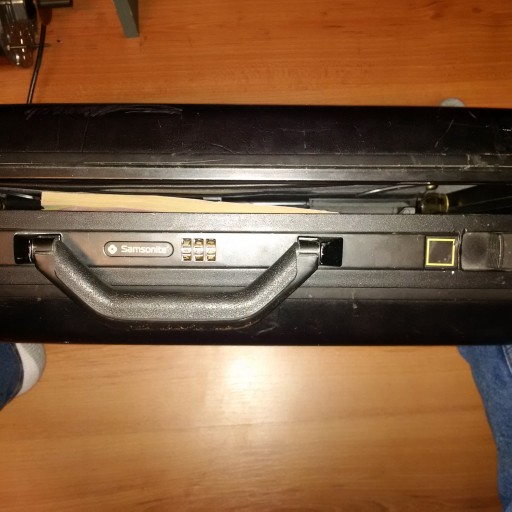 And, yeah, it was only a pad of construction paper and some dried up markers.

(Submitted by Andrew Wright aka Bun-Bun)

After acquiring a used Cubex Duo 3D printer, I discovered the heated-bed did not actually heat. The PID controller for the unit appeared to be functional and the relay could be heard actuating, however upon testing with a DMM I found the relay to not be contacting. Opening the PID controller revealed a cheapo chinese relay which made me think if there was a better way: an SSR would be quieter (silent) and more reliable than a mechanical relay in the given application. With the help of Scott Walde I sourced an SSR and tested the PID output with a resistor and LED to prove an SSR would work. I drilled and tapped a hole to attach the SSR to the PID enclosure and applied thermal paste; the enclosure is the heatsink for the SSR. I bypassed what was the chinese relay and used the PID connections to wire up the now externally mounted SSR. It works perfectly and any concern on heat dissipation of the SSR is nullified in practice: the heat from the SSR is only enough to take the chill off the metal enclosure, not warm it up.

In addition to his obsession with obsolete display technology, John has also recently become obsessed with these insects.  Last night he spent some time mounting his new acquisitions in a shadow box.